Chania, distinctive and attractive with its backdrop of the wonderful White Mountains (Lefka Ori), is a stunning town where modern, Venetian and Turkish traditional architecture are blended together, making it a fabulous place to visit.

Archaeological sites, historic architecture, museums, markets and churches, and a number of brilliant beaches around the town and prefecture including Golden Beach, Falassarna Beach and Elafonissi Beach which are included in our Best Beaches Guide.

Chania is the second largest city of Crete and the capital of the Chania regional unit, with a population of over 60.000 residents . It lies along the north coast of the island, about 70 km (43 mi) west of Rethymno and 145 km (90 mi) west of Heraklion.

The city of Chania is built over the ruins of the ancient city of Kydonia, part of which are still visible. Since the ancient times, the city of Chania has faced many conquerors and the influences of many civilizations through time, evident on the city monuments. The beautiful city of Chania managed to preserve its original colors and historical character, despite the fast-growing tourist industry. It is considered as one of the most beautiful cities of Greece and the most picturesque city of Crete. The city of Chania is also characterized by a rich cultural life. A plethora of cultural events are organized every year (exhibitions, festivals, theatrical and musical performances, ect.)

The city has an international airport and the adjacent port of Souda, is the largest natural port of the Mediterranean.

The Venetian port provides pleasant promenades through picturesque streets and attracts many visitors throughout the year. There are also many bars and restaurants by the seaside for every taste. The districts of the city outside the walls still preserve their Venetian nobility. Narrow passages surrounded by elegant houses built in different historical periods offer visitors pleasant routes to discover. Many neoclassic buildings are also preserved in neighboring districts, such as in "Halepa".

The climate and the configuration of the land make the county of Chania a paradise for thousands of plants and animals. Lilys of the sea (pancratium maritimum), lavdano (lavdanum), cyclamen (cyclamen creticum), Cretan tulips (tulipa cretica), maple (acer creticus). The endemic and unique dittany (origanum dictamum), malotira (fideritis cretica) and matzourana (origanum maiorana), are medicinal boiling plants which are abundant. On the plain of Omalos you can find stamnagathi (cihorium spinosum). Dried or freshly cut, these special medicinal herbs can be found in the Public Market or local shops. Over 1742 unique Cretan plants can also be found, 10% of which exist only in the county of Chania. The proud Cretan beast (capra aegagrus cretica) lives freely only in the Samaria Gorge. There and elsewhere, you can see Cretan eagles (aquila chrysaetos) and partridges (alectoris chukar). Ferrets, skunks, weasels, hares, hawks etc. can also be seen in open places. There is also an endeavour to protect an area on the north shores of the county especially for the turtles (caretta-caretta) that live there.

A detailed map of Chania city centre can be found here. 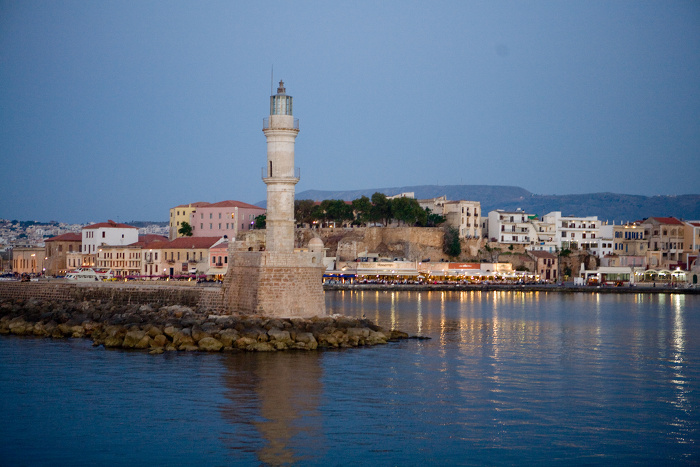 The climate is relatively mild, Mediterranean. During the fall and winter months north and northwest winds dominate, while in the summer the ill winds make it enjoyable. But the divine gift of the eternal sunshine allows one to start their vacation from March and end it at the end of October.

Chania has the largest amount of water in Crete (65%), and for this there is rich vegetation of plants and fruitful trees (citrus trees, olives, vines etc.) as well as semitropicals. The very clean beaches of Chania win always the "blue flags" of Europe and are accessible for all ages throughout the year.

In summer, be prepared for hot temperatures: Bring sun-block, dark glasses, and a hat.

Get the Chania Weather Forecast