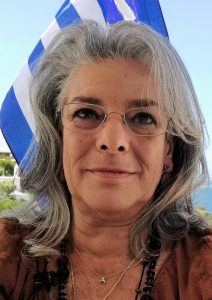 Aliki Mitsakos, born in Athens, Greece, has lived and worked in many countries abroad.

She has a career in Medicine and a parallel one in Civil Society, non-formal Education and International affairs, which continues following formal retirement from the Medical practice.

She has worked at all levels and eventually as Director of Anesthesia Dept. and the Intensive Care Unit, keeping simultaneously a Private Practice. She has practiced in Greece and abroad, including Stanford University in California and other Centers in the U.S.A.; in London, England; Moscow, Russia; and Cape Town, South Africa. She has taught at the University of Athens, the Institute of Vocational Training, and many postgraduate programs.

Besides her professional career, she has also been an active member of Civil Society, for the past 25 years and more, on issues related to International relations, Security, and Education, with a particular focus on Youth and gender issues.

She has been active in Soroptimist International, served as President of the Union of Greece, is founding member of the Greek Association for Atlantic & European Cooperation, Chair of Women In International Security – Hellas, Ambassador for Peace of the Universal Peace Federation, President of the Arsakeion schools Parents Association and Confederation, and more. She is also involved in Greek Politics including a candidacy at the Regional Municipal elections.

She has participated at over 250 major Conferences and meetings all over the world, both in the Medical and Political capacity.

Activities include the U.N. N.G.O. Meetings on the Palestine issue, women and children of Africa through the AWEPA Task force on Child Survival On The Frontline and the GR-UNOMSA Independent Electoral Committee for South Africa, the Southeast Europe Leadership Initiative for Women and the International Forum for Women Entrepreneurs, and more.

Has delivered a number of addresses on her related broader interests, and published monographs and many articles to scientific journals, the daily press and magazines, such as the Foreign Affairs.

The broader professional and civil interdisciplinary experiences she has acquired over the years, through active involvement in Civil Society, International Relations and soft diplomacy, and, of course, Education, both formal and non-formal, have led to active involvement in promoting broader interdisciplinary education as the necessary form of education for all citizens who wish to be constructive in their disciplines and societies, particularly during their younger years.

Through G.A.A.E.C. she has organized numerous educational programs, mostly international, focusing on geopolitics, security, and international affairs. The gender perspective was always encompassed as a standard feature, to incorporate also implementation of the Action Plan for Greece on the UN Security Council Resolution 1325 “Promoting the Political Participation of Women in all Aspects of Peace and Security” and beyond.

She has been actively involved in the organization of the International Institute for Political & Economic Studies, through G.A.A.E.C. in cooperation with The Fund for American Studies and Georgetown University for over 20 years, serving also in the IIPES Board of Advisors. IIPES has been the largest educational international program in the Mediterranean, and retains an Alumni network of over 3000 professional around the world.

Realizing after research the need for a constructive summer program for youth in the late teens she created and launched in 2004 the unique International Educational program for teenagers “Kernels of our Future” © based on non-formal / informal education methods, eventually rebranded to Leaders For Our Future©.

The International Center for Leading Studies was founded in 2012, following the reorganization of the educational projects of G.A.A.E.C. She is currently serving as Dean of the Center.

Her main interest is researching and developing non formal education methods and practical tools that can proliferate leadership for the younger generation, as an investment for the future of our societies.

She is married to Theodossis Georgiou and have one son, Electrical Engineer and Computer Sciences graduate, working as international Business Consultant. The Kernels program was created for him and his peers!